On the 15th June 2021 the Cambridgeshire Flora Group were walking westwards along the Guided Bus Way from Oakington towards Over.  Just before the Northstowe/Longstanton station Alan Leslie spotted a rose with deep pink flowers and green leaves growing in the planted hedge on the north side of the path. Alan identified this rose as Rosa virginiana and is the first record for Cambridgeshire. The hedge has been planted as part of the Guided Bus Project from a 'hedge pack' which mainly contains hawthorn but has at regular intervals rose species, mainly Dog Rose R. canina plus less frequently Sweet Briar R. rubiginosa.

Somehow either by design or mistake the rather unusual American rose has been included in the 'hedge pack' and is now growing free in our countryside.  The Virginian Rose has escaped before in several counties and is included in the BSBI handbook No. 7 by G.G. Graham and A.L. Primavesi.

The following are a few photos to show the features of this American Rose and I include some links to papers on rose evolution.

The deep pink might suggest these plants have come from a cultivated form as the handbook suggest the flower colour can be pink to white. It also suggests that the cultivated forms sucker freely, whereas in more natural stock, suckers are few (according to the handbook). The five plants in the Busway hedge were all suckering freely.
One of the first observations that made this rose stand out as odd, was the stigma dome which was very hairy (villous). In fresh flowers it was yellow but soon turns pink. 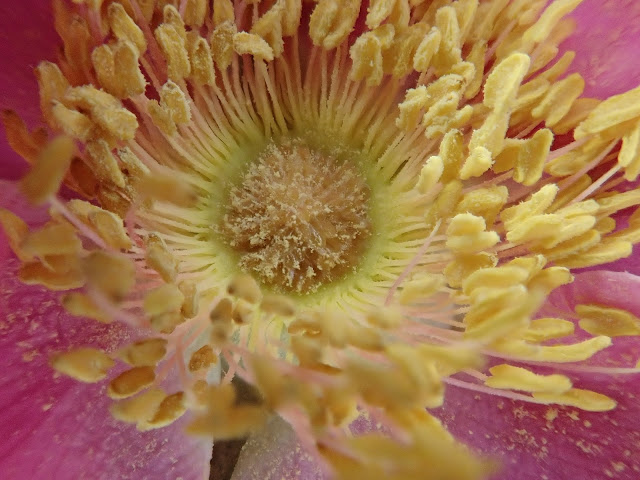 Although not a important detail, the bracts are shown in the above photo. The centre pedicle has no bracts but the two side pedicles have a bract at the base plus two smaller bracts ranged oppositely about half way up the pedicle. These bracts did not hide the glandular hairs on the pedicles.  These bracts had sparse glandular tips along the margin.

Pedicles were up to 4cm rather than the 0.8-1.5cm as stated in the handbook but the length of pedicles is always variable and the handbook uses average values. Not sure what he average length would be but certainly more than 2cm.

An interesting feature of this leaflet is that the teeth do not start at the leaflet base, so you have an entire margin to the first quarter without teeth. This is shown in the handbook illustration by Margaret Gold but is not commented on. This particular leaflet has 12 teeth on a side, which is a low count as a more typical count would be 18. This shows that teeth count is variable.  The average count should be 14 according to Bean, but my experience on these planted roses, is that teeth count is quite variable and some leaves are in some parts bi-serrate. Do you count the secondary tips?

In many ways this rose is quite familiar to our British roses. For example, the leaflet margin teeth having the temple dome shape, (convex then concave), as seen in R. arvensis and many R. canina.  A paper on the evolution of roses suggests the American roses have been long separated at 4.1 million years at least :-

This feature of a wide stipule (especially at the leaf end) is one of the identification points that separate R. virginiana from the similar R. carolina which has only a narrow stipule.
R. carolina also tends to have only 1-2 flowers per stem rather than the 3 or more in R. viginiana. The following site has details on how to tell these species apart.

Native distribution from a paper on evolution of American roses which suggests separation of these species is not easy and the Americans face the same problems as European rose taxonomists.

Although there are some discrepancies in the handbook description, compared to the roses shown here, like the stipules being narrow, (shown wide in the illustration by Margret Gold), I am happy that the plants found on the Guided Bus Way are Virginian Rose, which was a new species I was not expecting.  This species is available for sale in the UK.

Posted by Violets and others at 12:38