A follow-on blog from my general blog on dry habitat 'Forget-me-nots July 2020' Myosotis ramosissima with attention to the sub-species ramosissima and globularis, using knowledge gained in Spring 2021. Both sub-species would appear to be present in Cambridgeshire. A comparison with M. arvensis is also included. 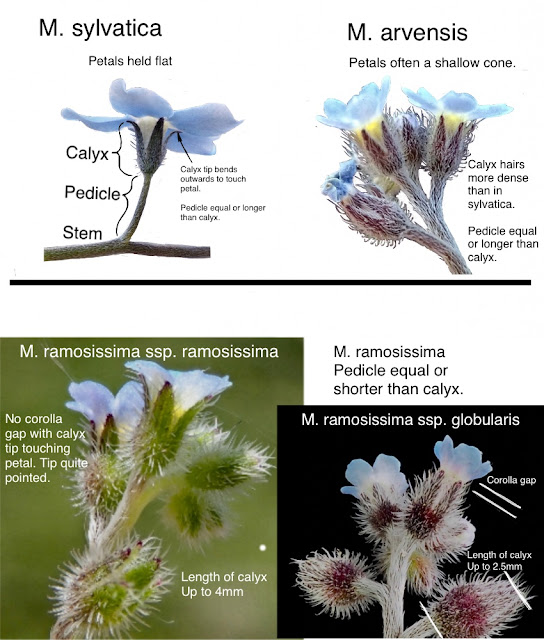 1) Flowers present almost to the base of stem.

In this particular plant as shown above, the stem leaves were limited to either one or two, with the highest being only 1 cm from the base. The inflorescence then continues 7cm beyond the top stem leaf. The stem leaves were at stem junctions.

The length of the calyx was measured at 2-2.5mm and the calyx lobes are cut to slightly more than half way and are quite blunt tipped. The tips of the calyx fall short of the petals so you can see the corolla tube before it splits into the petals. The petals are held in a cone rather than being flat.

The above photo shows the calyx is just over 2mm in length and tends to have the calyx teeth slightly open in fruit. The corolla tube is easy to see with a gap between the calyx teeth tips and the petals. The  flower has a diameter of just under 2mm.

The tips of the calyces are touching the petals so there is no gap to show the corolla tube. The calyces are slightly more pointed than shown in ssp. globularis.  The length of the calyces were over 3mm.  This plant was found in the short turf of the dunes just west of Holkham Pines, Norfolk.

Field Forget-me-not M. arvensis can look similar to M. ramosissima ssp. ramosissima  with no corolla gap but the pedicles are longer than the length of the calyx and so far, this has always been a clear difference.

Flowers present almost to base of stem although this may be a difficult feature to determine on some plants due to variation in growing structure. Corolla gap is clear. Note short pedicles.

Summary. Sometimes very small plants of Field Forget-me-not M. arvensis are hard to tell apart from Early Forget-me-nots M. ramosissima. Some knowledge of the two sub-species helps in distinguishing Early ramosissima from  Field M.arvensis. I thought at first that the corolla gap would be a good feature to distinguish them.  This hit a problem fairy quickly in that some ramosissima lacked the corolla gap and hence triggered an investigation of the literature.

The two sub-species both have chromosomes 2n=48 and some plants will be intermediate. So far, on a limited sample, these two sub-species do seem to be consistently different, based on the four differences noted by Sell and Murell.

Stace gives the sub-species name lebelii to the intermediates The difference in the shape of the calyces' lobes is very subtle and the structure of the plant can be be variable but the corolla gap and length of the calyces seem to hold up well. With a larger sample I would expect some intermediate plants to be found and it would be interesting to take samples from many sites and plot the corolla gap and length of calyx to get distributions. The pedicle length could be added as another parameter.

There is truth in the words in Sell that 'M. arvensis , ramosissima and sylvatica run into one another and are difficult to distinguish on precise characters but can usually be recognised in the field when all taxa involved have become familiar'.

Hopefully these photos will help in the identification of both versions of Early Forget-me-not.

Posted by Violets and others at 01:55

Email ThisBlogThis!Share to TwitterShare to FacebookShare to Pinterest
Labels: Forget-me-not