The ID Key features blog, August 2019 is a reduced set of features to distinguish between all the wild Geraniums found in the UK when in flower.
Additional features and photos are included here to give a more complete picture of the differences.

Petal colour is often the first clue in separating G. Molle from G. pusillum, normally being a deep pink, however white forms are common with intermediate colours also common, including some with a pale purple tinge.
Small-flowered, (G pusillum) often have a blue tinge in the petals which are also often narrow with a gap between them.

Small-flowered G. pusillum in all the photos I have taken, have had a pale off-white stigma whereas G. molle have had a pink or reddish purple stigma, only once has a plant been found with a pale stigma.


Stigma colour is not mentioned in the literature as a method of identification which is surprising but  some Dovesfoot Cranesbill rarely may have a pale stigma.  An example follows but they are infrequent.

Occasionally the petals may not have the notch, see the comments and photo at the end of the ID Key August blog.

The style splits into 5 curved stigma arms at the centre of the flower, with the stamen filaments holding the anthers arranged round the stigma in two rows. G. Molle has ten anthers whereas G. pusillum has only five of its ten stamen filaments having anthers. Anthers do fall off (after splitting to reveal pollen) so this feature may not be a clear cut in some flowers.


Note the overlapping petals have 5 veins which can be paler or darker than the pink of the petal and this may be dependent on the angle of the light. Some veins do split but not as much as the veins in the larger flowered Hedgerow Cranesbill ( G. pyrenaicum)  which shares quite a few features with G. Molle.  A significant difference is that the sepals on G. molle have long hairs whereas G. pyrenaicum has only short hairs ( many glandular ) .
Hedgerow Cranesbill (G. pyrenaicum) has flowers twice the size of  Dovesfoot Cranesbill (G.molle) and the sepals are shorter relative to the length of the petals. Size is always a dangerous parameter in plants as growing conditions can change some features more than others. Often flower size is largely maintained even when produced from tiny malnourished plants.


The both cases a sepals has been pulled back to show the mericarp.

Small flowers and no long hairs on flower and leaf stalks, separate pusillum from molle.  Leaf shape has been used in non flowering plants, as a identification feature but I found this too difficult. Much easier to use hair length.
The leaves are split to 2/3rds towards base and are very similar to G. molle.   The flowers are small and the three veined petals have either no or very limited overlap. G Molle petals often overlap but there is variation with some having no overlap.  The sepals have long hairs plus short glandular hairs much like G. molle.


Leaf shape is variable but certain features hold, like the 2/3rd cut towards base.

In practice this is not a difficult species to identify. It is much larger than G. molle and the flower colour is more normally purple/pink  than red/pink.  It does share quite a few features with G molle  hence its inclusion here.


The photo above shows the Hedgerow Cranesbill follows other larger cranesbills in that the stigma is not open to receive the pollen from the split anthers at least at first, suggesting pollination is dependent on insects rather than self-pollination that may occur in the smaller species like G. molle. 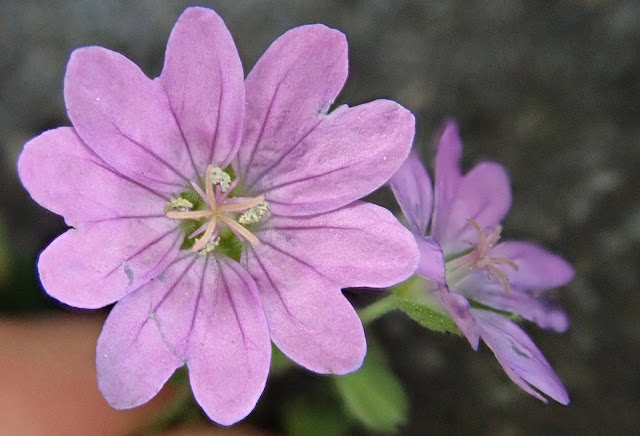 First 5 anthers have fallen off and the second set of 5 have split open. Stigma has also opened with its 5 pale pink arms. The Hedgerow Cranesbill seems to have a more complex timing arrangement of pollen and stigma availability,  but from a identification view only, the stigma is pale pink and has thinner longer arms than G. molle.


Leaves can be split into from 5 to 9 lobes/sections depending on how deep the cuts go and this is open to different points of view, as you can't use the vein structure to give a clear result.


4) Conclusion.
As usual, I use the excellent 'Harrap's Wild Flowers' as my constant companion in the field.
Additional information on Geraniums was also found in 'Hardy Geraniums' by Peter F. Yeo which has detailed introductory chapters on the family. It covers both wild and cultivated types.
I am fortunate that both G. Molle and G. pusillum both grow in my gravel drive here in Rampton.
I suppose the good news is that to date, none of these three species has hybridised so identification should be straight forward. It is just a matter of remembering the key features which is why I made up the ID Key blog in the first place. Please comment if you see any incorrect assumptions.

Posted by Violets and others at 13:53