Just a few holiday photos from the Beara Peninsula in West Cork.  July and August 2019
Some common , some rare but all, taken as they are attractive in there own right.


This is not the normal pale pink Bog Pimpernel ( Anagallis tenella) that is a common plant on Beara but a much darker red colour. I have never seen one this colour before.

Kidney Saxifrage ( Saxifrage hirsuta) is a a rare plant and was found in a deep gap under a large rock where the sheep could not get to it. It is found in Kerry and West Cork ( mainly on the Beara Peninsula) , the Pyrenees and Northern Spain.  It can hybridise with St Patrick's-cabage but this group look pure to me. Probably the most exciting find of the summer holidays.


Crowberry is a rare plant in West Cork and known from the top of Dursey Island where I have failed to see it.
A more assessable  site is the old mine working of the Dooneen Mine on the coast at Allihies. The Dooneen Copper mine opened in 1812 was the first mine at Allihies. At its peak the Allihies Mines  were employing over a 1000 people with its ore exported by boat to Swansea.

This is now called Irish Marsh Orchid ( D. kerryensis) by that nice Mr Stace in the 'New Flora of the British Isles Edition 3 (2010)'.  This broad leaved orchid has previously been called Dactylorhiza majalis ssp occidentalis, then it gained full species status, Dactylorhiza occidentalis . The Sherkin Beginners Guide to Ireland's Wild Flowers called it Broad-leaved Marsh Orchid which is a suitable common name.
Basically everybody was so confused that this orchid was not really recorded so its distribution maps are vastly understated.

Additional problems are that the Irish Marsh Orchid hybridises with the other common orchid in West Cork, the Heath Spotted Orchid.  Both species and the hybrids are quite common in West Beara.

Paler pink and with hairy sepals makes it easy to spot Cross-leaved Heather.  You can just make out the red glandular tips to the sepal hairs.

Heather ( Calluna vulgaris) also called Ling have flowers that form lines up the stalk and a different leaf shape. Heather tends to flower later than Bell and Cross-leaved heather.

Rock Sea Spurrey ( Spergularia rupicola) is a common rock plant near the sea in Garnish.   The other species of Spurrey, Greater and Lesser are rare in Beara and found on salt marsh rather than rocks. I have never found them.


Pale Butterwort ( Pinguicula lusitanica ) is a tiny plant of wet flushes and bogs and is quite common in West Beara  but very easy to miss unless you go looking for it.

Half way up Hungry Hill on the East side is a peat bog where peat is being dug out. Several old tree stumps are present. Possibly Scots Pine showing this area was forested several thousand years ago. 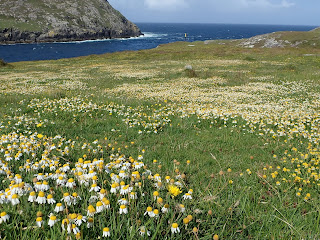 Chamomile ( Chamaemelum nobile) is common on the tracks and paths around West Beara but a display like this is  the best I have seen. Dursey Sound in the background. 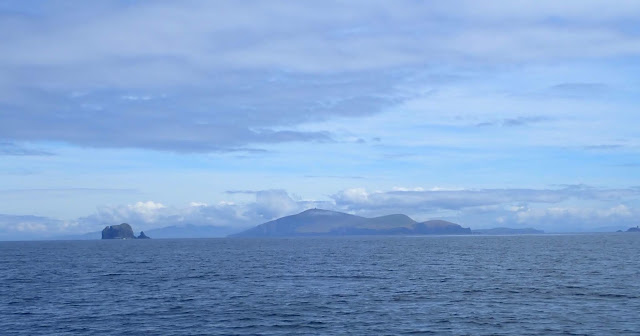 To finish a view from the Atlantic of the tip of Dursey Island and the Cow Rock on the left.

Posted by Violets and others at 12:17