Forget-me-not. How hard can it get?

Forget-me-not. How hard can it get?


When you consider dry habitat Forget-me-nots there are only four common species to consider. The field guides indicate that the flower size may be the key identifying feature however the dimensions of the flower may not be adequate to distinguish one species from another.  A quick check in the more serious literature emphasises this point, especially if you are (un)lucky enough to find a plant with flowers that are not the standard size e.g. sylvatica var. sylvatica.
Species considered here:-

To quote Sell and Murrell. m arvensis, ramosissima and sylvatica run into one another and are difficult to distinguish on precise characters but usually be recognised in the field when all taxa involved have become familiar.  Well that's reasonably hopeful but then quotes Arther Chater who says "In Cardiganshire, pollen size is the only reliable difference between M. ramosissma and M. discolor."
Pollen size is well beyond me so,  I just though I will put up a few photos from Cambridgeshire and see what we find.

This all started due to a potted up sample of Erophila developing three tiny Forget-me-nots which required identification. These three unexpected plants were small and the flowers were also small.  I have never really looked at Forget-me-nots before so it seemed a good 'lock down' activity. Wood and Field Forget-me-not also grow in the garden.

Wood and Field FMN are both common so I will start with that pair. 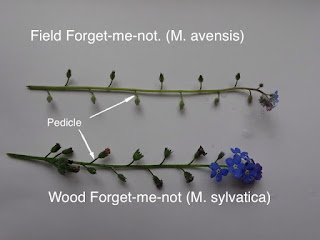 M. sylvatica is really a garden plant and has large flowers typically 8-9mm across.  It is planted and it escapes. Field FMN M. avensis is the poor relation with much smaller flowers.  It is interesting to note that apart from the flower size, the other dimensions of the pedicle and stem are much the same for both species.
The pedicle is slightly longer that the length of the calyx.  The calyx of the Wood FMN are open in fruit whereas the tips of the calyx are almost touching in Field FMN.  This is apparently a good feature but just how reliable it is after the comments by Sell is to be seen. The angle of the pedicle from the stem is not reliable.

Apart from the size difference, the point of this photo is to show how the stem terminates in a fine display of 3-5 open flowers in both species.  The flowers emerge from a ammonite like spiral at the stem tip in Forget-me-nots.  The flowers start off pink and change to blue when open. The Yellow ring called the 'Fornice' at the base of the petals changes to white as the flower ages.

Note the pink petals on the flower just about to open. The calyx holding the corolla tube is very hairy with hooked ends.  All the species considered here have these hairs. Also note the stem and pedicle have hairs that lie flat. They start patent ( at right angles) and turn through 90 degrees very quickly to lie against the stem.

This plant has forgotten to change its petals to blue, uncommon but a well known variation.

The above photo of Wood FMN showing the spiral of flowers which is much the same as in the previous photo of the Field FMN apart from the size of the flowers.

Disregard the red colour in the photo of M. sylvatica above, the red is from the background now removed and since the hairs are transparent it shows the background colour.  The hairs from the base to just over halfway are curved to the point of being hooked. Outer hairs are straight. The hairs in M. arvensis do in general appear to be longer and more dense than in M. sylvatica. The tips of the calyx tend to be close together in M. arvensis and open in M. sylvatica , but this is not always clear cut and may be dependent on whether nutlets are present.

As far as the two species growing in my garden are concerned,  separation by flower size is easy. The problem comes with  larger flowered versions of Field Forget-me-not, being occasionally recorded usually associated with woodlands. According to Alan Leslie, in the new Flora of Cambridgeshire, these large flowered versions are regarded as equated to subspecies .umbrata  and have a different chromosome number 2n=66 ( 2n=36,48,52 is reputed for subspecies arvensis).

Field Forget-me-not growing in poor soil on the Fleam Dyke can have small flowers, down to a diameter of 1.5mm.

The situation with Wood Forget-me-not , M. sylvatica is also complicated by a variant  M.sylvatica.var sylvatica  which has flowers 4-8mm wide and is regarded as the original wild type.  There is a another larger flowered variation var. cults with flowers 8-11mm which is usually a garden escape. These garden escapes can have bright blue flowers and also white flowers are not unknown.

I would conclude that any examples with intermediate size flowers would present quite a challenge since the open vs. closed calyx in fruit might not be 100% reliable?.  This is where secondary features like the density of hooked calyx hairs come in.

Unfortunately the nutlet shape  is not a reliable indicator of species as some M. sylvatica have nutlets with only a tiny rim, being much the same as M. arvensis. The other factor is that as the nutlets dry out, their shape changes.

The standout feature of the three plants in the pot is that the flowers are tiny.  They were measured at just under 1.5mm across. The plants are also small being 50mm high with either one stem leaf or no stem leaves.


The flower has the same fused petals ( just at the base) , and the yellow fornice, just like the larger species but the petals are very pale with limited blue towards the outside and a white base.


The plants from Isleham now potted up (with my Erophila) have paler flowers than the Cambridge site.
They both have fruiting calyces that are open so you can see the seeds developing.  The three potted plants do not show the spiral of new buds. In the first photo two more new buds are hidden from view, becoming the tip of the stem. See below.

This lack of a multi-flowered spiral seems to be a feature of Early FMN but whether it is a reliable difference from Changing FMN is unknown.  The above photo shows two flowers open and only two new buds forming. The lack of a spiral of new buds is apparent in all the Changing FMN's seen so far.

It is possible that the tiny plants I am looking at have a limited number of buds but larger plants might show more of a spiral? What does seem consistent is that the flowers of M. ramosissima point upwards but M. discolor point downwards and horizontally and are fading by the time they start to point upwards.


Note the thin stem ( 1mm) and short pedicles on the Early FMN as well as the small flowers. A much thinner plant that given good growing conditions can grow quite tall. Generally seems to have fewer leaves than Field FMN. Tends to only display one or two open flowers that keep their yellow fornice.

Two sub-species are present in the UK.
M. discolor ssp. discolor
Upper stem leaves nearly opposite.
Caylx is bell shaped with teeth not converging in fruit.
Yellow corolla at first    1.5 - 4mm across .


The Changing Forget-me-not shares the same small size of the Early FMN with tiny flowers.
As the name suggests the flowers change colour as they open which is not uncommon in all these species but the difference is that they change colour after they have fully opened. They open being white or yellow and change to pale blue then darken. The internet shows examples that remain yellow or white so there is variation in unusual cases.


Nutlets will not distinguish between Early and Changing Forget-me-nots, both have the same shape.

Conclusion. These four dry habitat Forget-me-nots are not quite as easy to separate as the field guides suggest and variation in flower size between Field and Wood requires careful attention to the calyx hooked hairs in order to conclude the identification in intermediate flowered plants.

In Cambridgeshire with a very limited sample it would appear that Early FMN (M. ramosissima) has flowers that point upwards when opening and Changing FMN (M. discolor) has flowers that open when pointing slightly downwards and then change colour and are fading by the time they are pointing vertically upwards. The spiral in Changing FMN seems to hold more flowering buds. Is this true in other parts of the country?