Cranesbills with long tips to sepals

These are small flowered cranesbills which have a long tip to the sepals, unlike Dovesfoot Cranesbill  (G. molle ) and Small-flowered Cranesbill (G. pusillum) which were covered in a previous blog.

These are additional photos and notes as backup to the ID Key Features blog of August 2019.

The above photo shows several key features, the pink petals have a pale white base which gives the flower a pale centre. The petals can occasionally have slight notches. The pale centre is the standout feature as otherwise it is easy to walk past thinking its just another Dovesfoot Cranesbill, which is much more common.

The leaf lobes are cut up to a half way and the shape gives the plant its common name 'Round-leaved'.
The leaves are variable in shape having from  5-9 lobes ( three at the apex). The apex leaves at the top of the plant can sometimes look very different to the rounded shape shown in the ID Key. The 'cut up to a half ' is a consistent feature.

The photo of the flower below shows the sepals have quite a thick point extension and it is just possible to make out the red-tipped glandular hairs.  The sepal extension is a variable feature, occasionally some plants only have a tiny extension. 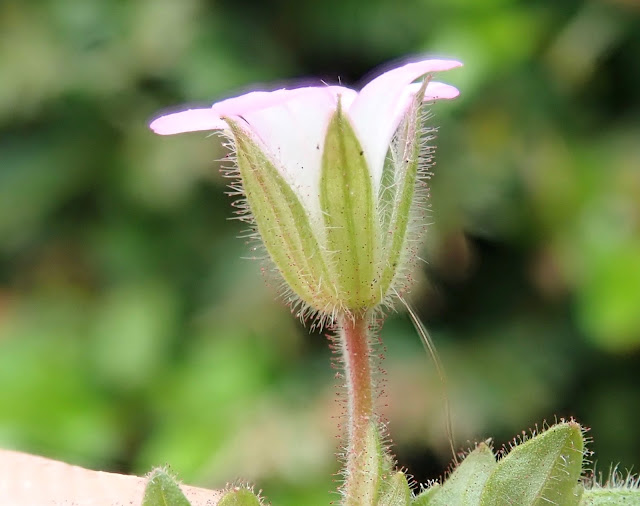 The most important secondary feature is shown above and is the red-tipped glandular hairs which stick out from the sepals, flower stem, leaf stem and leaf edges.  There are in addition non glandular hairs. No other small flowered geranium has these red-tipped glandular hairs except Herb Robert but that has white lines on the petals and a completely different leaf shape.  The sepal has a darker green centre line and edge lines giving it a striped appearance. This is quite common in many Geraniums and Storks-bills. 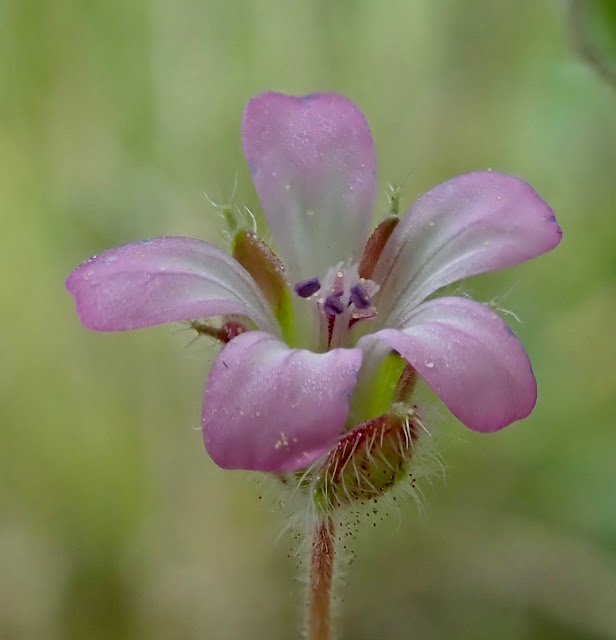 The petals have three pale veins and the anthers are purple. Hard to see the stigma in this photo but just possible to make out it is pale pink. The anther colour can be variable from purple through to almost white.  The mixture of long non-glandular and red-tipped glandular hairs can be seen on the sepals.


The cranesbill as it springs its seeds out, with two of the five mericarps sprung. Sepals have turned slightly red at this stage showing the three stripes. The stems are often red.


The flowers are held on long thin stalks.  The flowers are also slightly bell shaped and this and the long stalks is normally what makes them stand out from the Dovesfoot Cranesbill that is the most common species. The plants are often taller and climb through other vegetation.  Long-stalked Cranesbill is quite rare in Cambridgeshire, so it is always nice to find.

A key secondary feature is all the hairs on Long-stalked Cranesbill are pressed flat as shown above. These flattened hairs also cover the leaf stems and the leaves.

Close up of flower and leaf showing reddish stigma and pale anthers with blue line.


The standout feature, apart from the deep pink colour of the petals, is the very long sepal tip. The flower is similar to the Dovesfoot Cranesbill in that it has notched pink petals but the sepal tips are  much longer than the petals and I have not seen any plants that have any variation in this key feature.
Flowers have short stems. Occasionally the petals lack the notch.

Next example is a pale flower variation which is quite rare.


In common with other cranesbills and storksbills, the pale versions of these flowers also have paler stigma and anther colour. In this case the stigma is off white and the anthers are pale pink. The normal deep pink flower has a dark pink stigma. Note this photo shows the five petal veins well, as it is easy to miss the two outer ones.

This photo shows the mainly glandular hairs with clear glands on the flower stem and the sepals mixed in with some non-glandular hairs. Note the aphid which has to battle against all this sticky stuff. 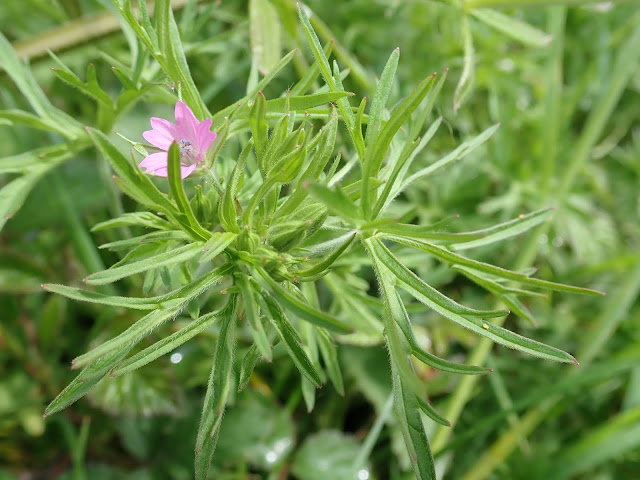 The flowers are on short stalks and the leaves are deeply cut and individual lobes are thin. Plants are often quite large but the flowers are tiny.


Winter leaves can be very different in shape looking like G. molle. Leaf hairs are angled downwards away from leaf at angle up to 45 degrees.

These three species are fairly straight forward to identify.  The leaf shape of the Round-leaved Cranesbill and pale versions being the possible variations.   Careful examination of the hairs will offer a clear ID feature in each case.


Peter Leonard
Rampton, Cambridgeshire
14th November 2019
Posted by Violets and others at 14:16