Christmas Tree in May?

Identification of 'Christmas' Tree in May. 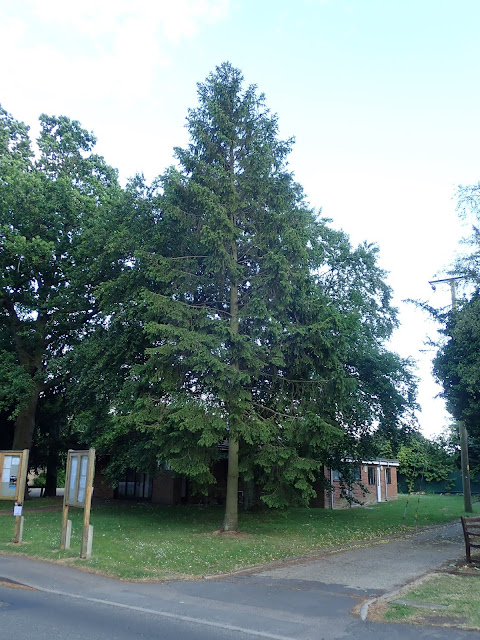 Lockdown Project. What is the conifer planted by the Rampton village hall?

I have never really got to grips with conifers, just one of those 'never quite got round to' tasks. I have quite a few tree books but they tend to jump straight into species.  With so many species and cultivars planted some knowledge of the genus groups would be useful.

The tree in question had no cones visible, it is not an old tree and in many ways unremarkable.

Checking through the books, I found 'Know Your Conifers',  Forestry Commission Booklet No 15  Price 6s 0d.   1970.   This had some good advice based on looking at the leaves. There is a warning to avoid upright leading shots or juvenile foliage.  'Go for the side branches' sounded good as some were within reach.
Fist trick is that you can see the individual leaves or should I call them needles?.   They are not all tight to the stem so we can exclude a whole group of difficult conifers like Leylandii and Lawson Cypress.  Example photo below.

Pines of the genus Pinus have  needles grouped in two's, three's or fives's so we can exclude those as well as we have single needles on the Rampton tree. The hemlock or Thuga genus  have needles that vary in length which the tree in question also does not have. I know it's not a Yew or a Juniper.

The next trick is to see how the individual needle is attached to the stem as that is a key identification feature. The needles are attached with a short brown peg.

So now I know I am dealing with a spruce from the genus Picea because the needles are attached with a peg.

What kind of Spruce?

The "Know your Conifers' book covers two species of spruce, Norway and Sitka because back in 1970 that is what they grew commercially.

Actually there are quite a lot of spruces. Most are exotic, planted in gardens and arboretums.
The most common Spruce is Norway Spruce Picea abies and that is 'readily told apart from others by its soft mid-green needles, which are pointed but not sharply so'.

The Sitka Spruce Picea sitchensis has bluish or slate-grey tinted needles which end in a sharp point.
A short video from Jim Waterson picks out key features of Norway Spruce:-
https://www.youtube.com/watch?v=d2naxGZKOgY&list=PLRKWnZs4l1bBDFiFRME9zuvHYyZnCJ1Xm&index=6

The key features being classic green top and bottom of the needles which are of even length, and are distributed round the stem to give bottle brush like effect. Texture not harsh to the touch.

All this seems to fit with the tree beside the village hall. Norway Spruce used to be the most common Christmas tree but has been superseded by the Nordmann Fir.

The double check. See what a Norway Spruce looks like at Lynford Arboretum.


This looks just like the village hall tree. The needles are green looking from the top and from the bottom. This is because the lines of white stomata are the same on all four faces of the needle. The stomata are in two or more usually three rows, of evenly spaced white dots. The brown stem has an interesting pattern and have almost no hairs. No hairs is a identification feature to separate different species of spruce.

The needle tips can be seen to be quite pointed and the pegs are still green on new shoots.

Needle attachment in other conifers, a few examples follow.


2) Douglas Fir Pseudotsuga menziesii.  Foliage most like the silver Firs but suckers are tiny and only evident when the needle is pulled off.


3) Western Hemlock Tsuga heterophylla.  The leaves are different lengths and do not have the same shape being flatter. The needles have thin bases that run parallel to the stem.

Little brown pegs mean Spruce,  Genus Picea. The tree outside the village hall is a Norway Spruce.
I have learnt just a little about conifers, so a start has been made.