Added to my species list in July 2019 during at visit to Allendale, Northumbria. This blog is my attempt to identify Marsh Hawksbeard for the first time. It follows my blog on Northern Hawksbeard which is a much less common plant. At the end I have added some photos of Crepis lampsanoides from Portugal which shares a key feature with Crepis paludosa.

The key to the identification of Marsh Hawksbeard would appear to be the shape of the mid stem leaves. The excellent Harrop's Wild Flowers field guide  says 'stem leaves clasping, with large rounded basal lobes' whereas 'Rose' in the 'Wild Flower Key' says back-pointed basal lobes forming arrow-shape, with Northern having rounded bases. If this seems unclear I hope the photos below explain why the both field guides are correct.

The photo above, showing a lower stem leaf, highlights the toothed margin, so you could think, it's a Hawkweed, but it isn't.  The very wide base and no leaf stalk would be odd for a Hawkweed. Its not a typical leaf anyway, but that's why I took a photo to show variation.

The basal leaves at ground level have a winged stalk and toothed to shallowly-lobed margins with a pointed apex. I don't have any photos because they have often gone by the time of flowering so I didn't see any.

My first Marsh Hawksbeard in typical habitat of a stream/ river side and wet woodland.

Lower stem leaf , same one as top photo, was quite a extreme shape with its curved teeth and sessile base ( no leaf stem). Note lack of hairs on stem and leaf. Strangely this leaf does not have the backward pointing lobes of a typical leaf.

The leaf above is more typical than the first leaf shown. Again it has the toothed margin and hairless surface. The base is interesting as the leaf does not clasp the stem in terms of running down into it, but  wraps round it with large rounded un-attached basal lobes ( Auriculate ). These lobes have teeth and that is probably the reason for the 'arrow shape' in the Rose Field Guide. The basic shape to the lobe is round but has teeth superimposed onto it. Depending on the size and position of the teeth you could have rounded lobes or pointed lobes!.

Yet another mid stem leaf but this time with limited teeth. The rounded basal lobes (auricles) have teeth but the rest of the leaf is free of them. The backward pointing auricles are quite small on this particular leaf, almost into Northern Hawksbeard territory, but the pointed teeth do not fit with Northern.

Close up of the leaf to stem junction. Also shows lack of any hairs on stem or leaf.

Conclusion.  The two ID keys to the identification of Marsh hawksbeard are:-

1) Marsh Hawksbeards lack of hairs on leaves and stem, as both Northern Hawksbeard  and Hawkweeds normally have them.
OK a few species of Hawkweeds will not be hairy, but that's Hawkweeds.
Northern Hawksbeard leaves can sometimes be very sparse so you need to look closely to see if any hairs are present so this might be a difficult key on some plants. This is why the Cumbria blog probably did not highlight this feature. You can say if the stem and leaves have hairs, it is not a Marsh Hawksbeard.

2) The mid stem leaves have backward pointing un-attached lobes (auricles) that go way past the stem and are basically rounded but often have pointed teeth superimposed on the margins. This combination is the special feature.
Since leaf shape can vary, the first leaf photo being an example of an extreme, it is best to look closely at all the stem leaves to make a judgment. The Northern Hawkbeard can have un-attached backward pointing and rounded auricles on mid and upper stem leaves but they are smaller and do not go much beyond the stem plus these leaves do not have the teeth along the margin. Best to look at the leaves shown here, on my Northern Hawksbeard blog and on the Cumbria botany site to get a feeling for the differences. With only a very small sample seen, the Marsh Hawksbeard had mid-stem leaves  that looked quite different to the Northern Hawksbeard but I do not have a wide experience of the possible variation. I hope the next two drawings give some clarity to what might be a tricky distinction. Occasionally Northern Hawksbeard mid stem leaves can have the odd tooth so it is good to look at all the leaves.

The basic feature of the cup and saucer pattern of the phyllaries to indicate a CREPIS, does not really work for Marsh or Northern Hawksbeard as the phyllaries are adpressed and of varying length, much like a typical Hawkweed. What is different, is the length of the glandular hairs, but this is apparently a variable feature and some plants can have almost no hairs according to Sell&Murrell.

A few hairs do extend from the phyllaries down the stem a short distance including a tiny amount of the cobwebby hairs but in general the stem do not have hairs. 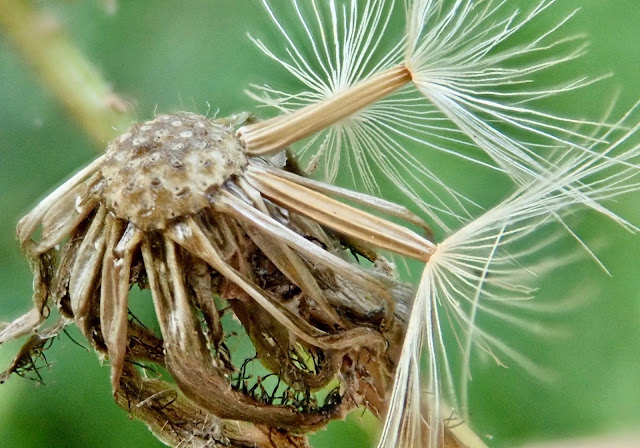 Achenes are 4-5.5mm long and should have ten ribs but that is rather hard to count as rib size seems to vary a lot. The pappus hairs are pale brown. The achenes are rather straight and are only slightly narrow at the pappus end. No beak.  They are a pale brown colour which is unlike the typical dark achenes of most Hawkweeds. The C. mollis, Northern Hawksbeard has a very different look with 20 ridges and tapered down at each end. 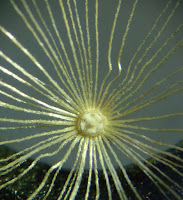 Pappus hairs have tiny barbs like C.mollis. and the Hawkweeds.
The receptacle pit is smooth without scales or hairs.
The achene has to be be a key Identification feature.

Flower showing the yellow petals contrasting with the green stigma/style. 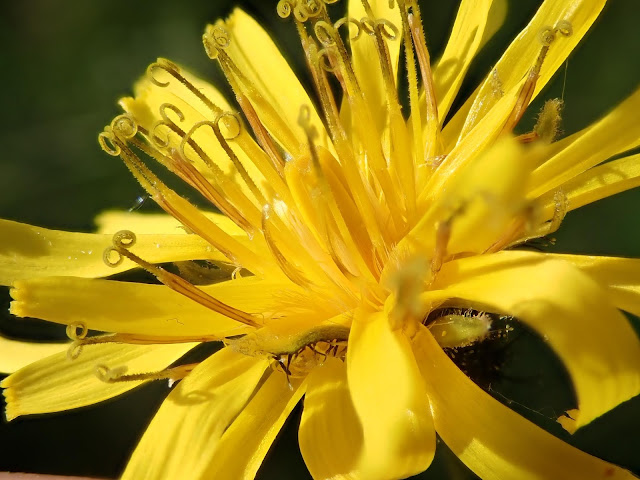 Final photo of the flower showing the stamen/anther tube with the red stripes as also seen in Northern Hawksbeard.  I did not see any petals that were not completely bright yellow, no banding present.

That concludes photos of Marsh Hawksbeard. The mid stem leaves are the key feature in the UK but if you venture into Europe they is another Crepis that has some similar un-attached backward pointing lobes on its leaves. 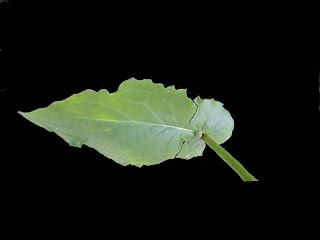 Seen in northern Portugal. Range, North Portugal through the Northern mountains of Spain through to the Pyrenees and into Southern France.
(Ref the Flora-On website which has good photos and distribution maps for the wild flowers of Portugal.)

Although the leaf shares some similarity in the way the two backward lobes clasp the stem the leaf shape is very different from Marsh Hawksbeard. The leaf is lobed almost back to the leaf stem twice before the main part of the leaf widens out. The leaf and stem are hairy.

This leaf is a bit more like Marsh but still has the odd narrowing. It has some small teeth on the margin.

Flower showing stigma/style are yellow and not contrasting with the petals. The stamen/anther tubes have the same red stripes that both Marsh and Northern Hawksbeard show. 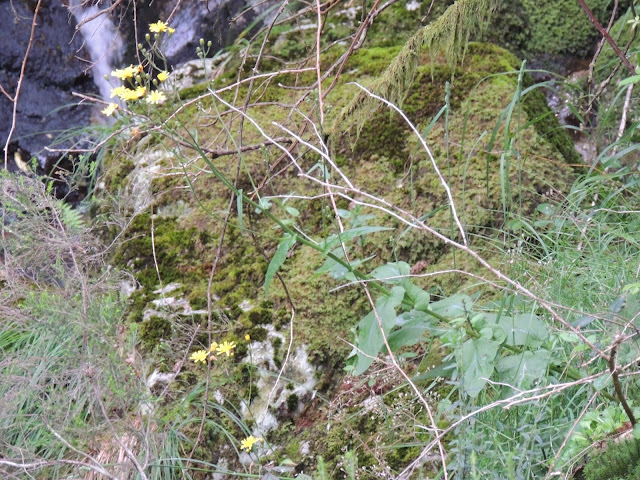 Final photo showing just how many leaves are on the stalk.

Posted by Violets and others at 03:57